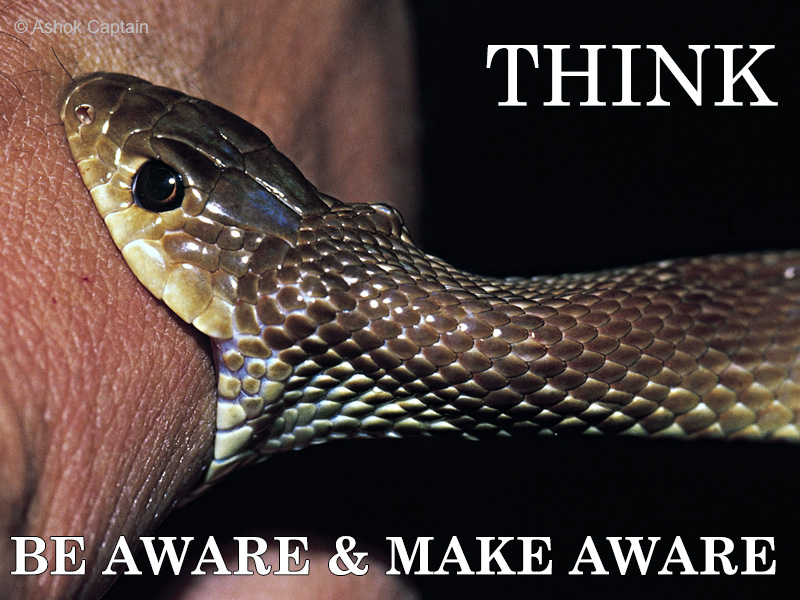 “Not again, not again” were the only words I could utter when Vishal Santra called to share the news of Chirag Roy losing his life as a result of snake envenomation at Tadoba. I knew Chirag only through Facebook and a few common friends. I also knew that he was a mature person working in the field of wildlife for a long time and had considerable experience as a naturalist. I also heard that his death may have been due to anaphylactic shock – a reaction to the anti venom. I still don’t know what exactly happened. Whether it’s a mistake while rescuing the snake or mismanagement at the hospital by untrained doctors, either ways it’s a common scenario in our country, with the only difference being, this time it was disturbingly close to home!

There have been many Chirags with maturity and experience who lost their lives in the past as well. Some of us may call it an occupational hazard and some may term it heroism or even martyrdom to cause. I will only say that it’s nothing else but plain tragedy. It shows disregard to one’s own safety, disrespect to the animals whom you are trying to conserve, and a complete lack of knowledge and information on part of the so called ‘naturalist tribe‘ which has flourished in India as a part of the adventure and wildlife tourism or the conservation bandwagon. I have already written about snake bite deaths in India in my earlier blogs (The Lost Frontier, https://kedarbhide.com/?p=1301 ) and too many snake friends losing their lives (The Rescue Paradox https://kedarbhide.com/?p=1483 ). So here, I just want to talk about how snake bite deaths are related to conservation and why do we need to give more attention to it.

For the past few years, some of us have been trying to point out that snake bite is the most neglected human-animal conflict issue in India. It does not appear anywhere on the wildlife and conservation list, not does it appear on the human rights list and it’s completely neglected on the health and welfare list too.

People from the field of wildlife, whose voice matters the most at the government and media level, don’t get time out of the tiger and climate change crisis to see other serious issues. People from the field of health, whose voice matters the most again at the government level don’t come out of the TB-Malaria-AIDS triangle even though there is one snake bite death to every two malaria or AIDS deaths in India.

Am I saying this out of frustration? No not at all, these are plain facts. Show me one program on snake bite in media like NDTV tiger campaign, or show me one human chain or candle light meeting that has taken place for this issue as has been done for many other environment & wildlife issues. I think this may be mainly due to the uncharismatic and common characteristics of these snakes – Spectacled and Monocellate cobras, Kraits, Russell’s and Saw Scaled Vipers – whose venomation results in the estimated 50,000 deaths each year. I am saying this because last year there was a case of death due to ‘King Cobra’ envenomation in southern India, which was widely covered by all media and wildlifers. I think it was also trending on Whatsapp for a long time!!!!!

The issue is of complete apathy towards a serious problem by majority of the opinion makers in the field of conservation and health. Either we have succumbed to those snake superstitions of our traditional folklore or we have accepted it as a fact of life.

Today we are trying to create ownership of our forests with local communities. We feel that once the villagers, who reside around these tiger reserves, sanctuaries and parks start taking care of their forests, our efforts to save forests will be strengthened. And when you ask them what their biggest fear is with forests, you will find snake bite will be amongst the top three in majority of cases.

What are we doing about it? In any of our plans on community participation for saving tigers as an umbrella species, do we include mitigation of death by snake bite as a confidence building measure at the community level? Will such mitigation measures find place alongside tree plantation, compensation for loss of livestock or electrification of villages?

Possibly not, as human and snake deaths are not as directly linked as death of trees or livestock loss which results in a more obvious threat to survival of our umbrella species.

All those corridor-protection talks and wildlife-out-of-protected-areas discussions again conveniently forget the biggest conflict happening in these areas is of snake-human conflict. People don’t want forest covers around their homes and farms because they think snakes will increase (which of course is not true). But such beliefs have already distanced them from forests and wildlife.

Let’s keep aside what needs to be done at an organisational level, let’s talk about what role we as individuals can play – be it a wildlife enthusiast, conservationist, activist, naturalist, scientist or even a traveller while visiting these wilderness areas. Today snake bite is the only subject where possibly you and the local communities will find the same level of knowledge. This tragic death of Chirag makes this reality so stark that whether you are a top-of-the-ladder wildlifer or a local villager, both have the same preparedness when it comes to snake bites and envenomation issues.

Today there are serious groups who are working steadily towards snake bite death mitigation in our country. There are expert doctors who are available on call to guide on the spot medical personnel on treatment. There are treatment protocols available at the national level. Whatsapp groups are available for awareness and guidance. How many of us know this and try to disperse this knowledge at the local community level or at the medical personnel level. What we need is the ‘be aware and make aware’ philosophy.

There are some other complex issues like unavailability of anti venom or more specific is unavailability of the right anti venom and training of medical personnel on ground, which we are trying to address at an institutional level. What we are lacking is the collective wisdom and attention of our green community. May be we need to learn that in all our travels to wilderness areas, anybody of us can be a Chirag Roy and can lose life not because of snake bite but because of apathy/ ignorance of a serious problem, unpreparedness of yourself and the team with you and no capacity created at the ground level to address this issue.

I don’t just want to show you the darker side, but also want to tell you what you can do as an individual (a wildlife enthusiast, a conservationist, an activist, a naturalist, a scientist or a traveller) or an organisation –

1. Get yourself knowledge about snake bite and first aid:

2. Note emergency numbers of people who can guide you what to do in case of any eventuality. (These followings are representations, they in turn can guide you to nearest adviser if available or expert doctors who can guide doctors on spot)

3. Organize training programs for medical personnel in rural and wilderness areas on snake bite treatment. The people mentioned above can help you with that.

There is one very successful project running at Pithora in Chhattisgarh
http://www.indiansnakes.org/content/india-snake-bite-initiative
Similar projects can be undertaken by interested people.

4. Create anti venom banks using conservation funds at forest department or other institutions at local level. Even NGOS/Resorts/Adventure Companies can keep a stock of Anti venom for any eventuality of their own people or for Local communities.

One company always active to help is Premium Serums, http://www.premiumserums.com/ Dr. Khadilkar +919372828543, they can help you in supplying anti venom.

Always think about the estimated 50,000 deaths and 200,000 loss of limbs resulting out of the largest human – wild animal conflict happening in our country !!!!!! Be Aware and Make Aware !!!!! You can Save Life !!!! Save Forests by saving the people around it !!!