I have been craned 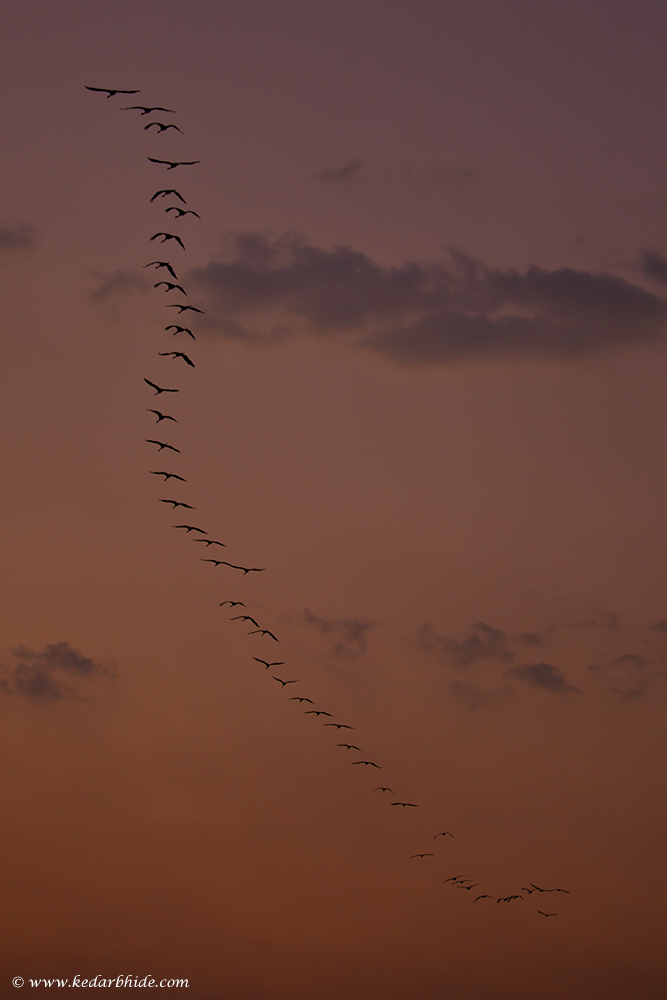 It was, way back in 2002, when I started seriously looking up to sky for photography , before that my photography world was always looking down to my beloved snakes and reptiles, I had armed myself with Canon 400 mm, 5.6 lens, brought second hand from Fort market and went to Bharatpur to shoot some birds. Every great bird photographer has stories of Bharatpur so I too decided that I want to be great like them.

Early morning , pull a camera backpack and cycle to those wetlands inside park and keep shooting till evening was a routine for 4 days. First day just went crazy, I was shooting each and every bird I can put my eyes on or rather camera on . Every bird was new to me, trying to identify them was fun as I used to come up with something new than the book. That’s when I decided that I will photograph them and let my birder friends identify them , and I follow that practice even today. I am sure that snakes identification is much simpler than birds.

So on second day I was following these thousands of Bar headed geese to get a better composition out of that large chaotic mass on a grassland, and suddenly 2 huge birds flew over my head, I couldn’t place them to any birds I knew or thought I will see there . But as a great photographer in making you don’t need to know ID of your subject to photograph so I scrambled to be in a position to shoot these two birds, One was chasing another, I could get couple of shots before one of them flew away. When I returned to my hotel and took out bird book and tried to identify what I photographed, it was very easy as you cant confuse identification of such a large and distinct bird. One was Siberian Crane and the bird that was chasing it was Black neck stork. And from that moment I had this little wish tucked away in my mind to shoot all cranes found in India. 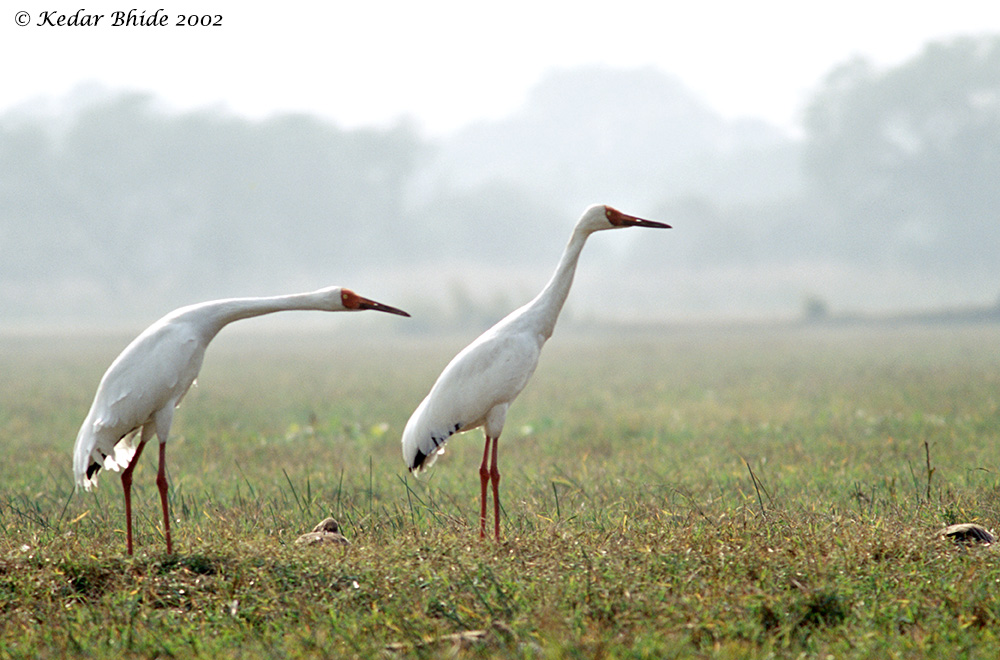 I was quite lucky to shoot this last pair of Siberian Crane during that winter which was migrated to Bharatpur, after that year we do not have Siberian crane in India. With Siberian Crane in my roles, yes, those days were of Sensia, Provia & Velvia, amazing emulsions by Fuji, I spent more time in shooting Sarus cranes during remaining two days. Siberian cranes had been now locally extinct from India, and we can only hope that some day some of them will come to India for wintering.

Indian Sarus Cranes are found mainly in north, northwest and western India , and its largest crane with height of 6 feet and wing span of 8 feet. Wetland loss to agriculture is a critical problem faced by these largest of the cranes. 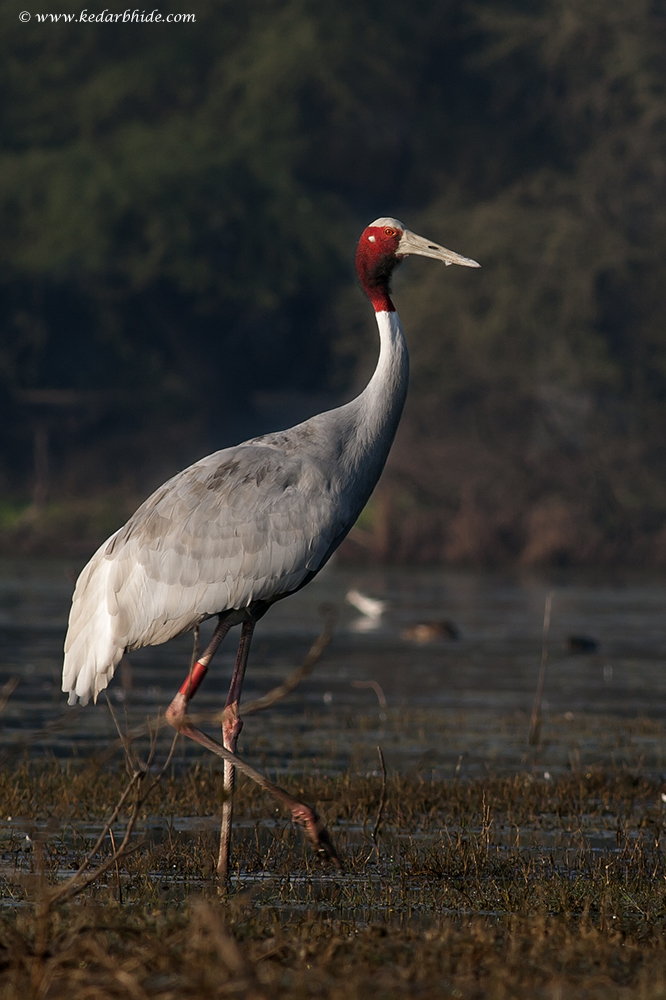 To get good shots you have to spent a lot of time with these birds, and wait for a good opportunity to get some action or a sharp portrait, as they keep moving and feeding and when they rest its generally during noon, with harsh sunlight so you need to be on your toes to capture them in your camera. 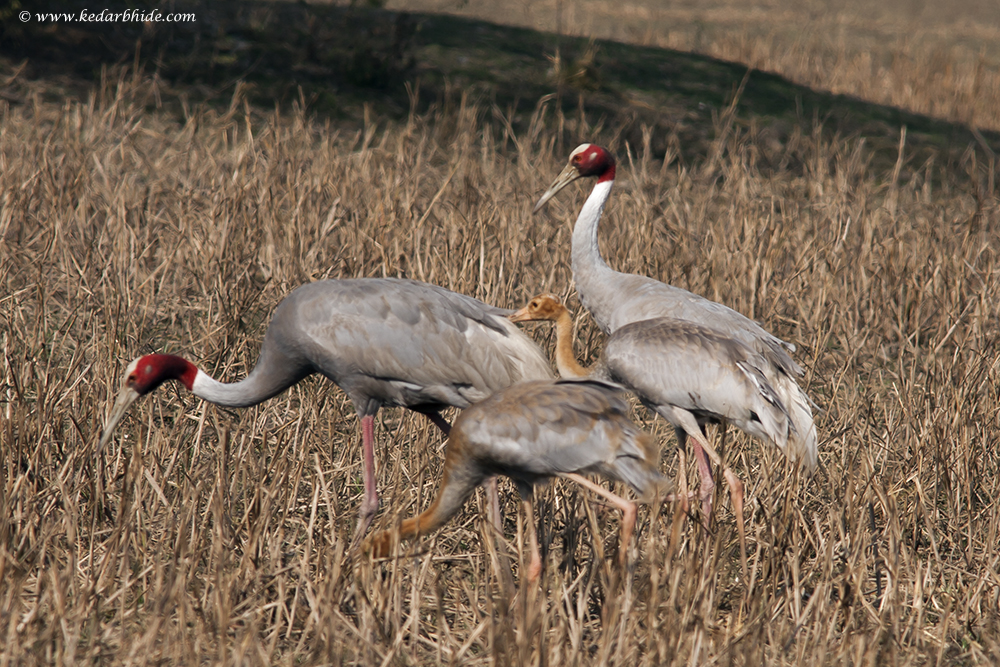 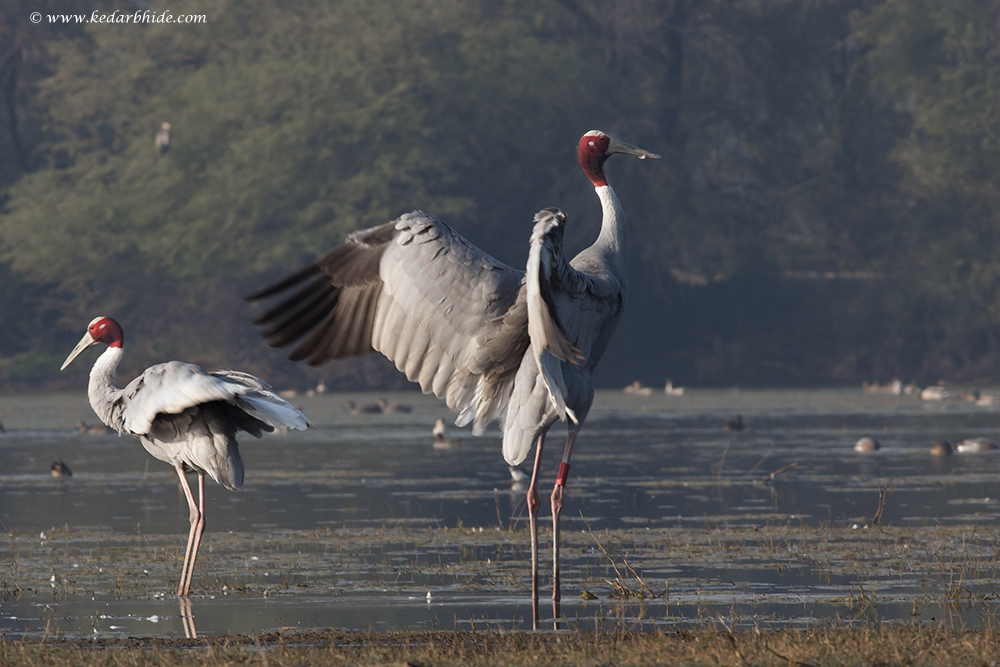 After 2002 my next crane sighting was in 2009 , of Black Neck crane on their breeding grounds of Tso-moriri and Tso-kar in Ladakh. During last 5 years I have spent time in photographing them at Tsokar . These are salty marsh lands and to get in a position to shoot these amazing and handsome birds , you have to walk a lot in knee deep mud. Also you have to be very cautious of your limits, you cant go to close as they are nesting there, a slight disturbance may cause harm to nest. Therefore I decide to shoot them only when they have hatchling out and moving with them. For 2 years I tried photographing them around these lakes with some luck got some good shots otherwise most of the time they were too far. That changed in 2012, when me and couple of my friends drove to ladakh in my vehicle and on one fine day while taking turn at Mahe bridge suddenly saw a pair of black neck crane just 15 feet away from us. They were busy in their courtship and calling each other and moving around, first time I was cursing my 500 mm lens as I couldn’t shoot them so close with that. So once my friends took their images, I moved my vehicle further back and could spend half an hour observing and photographing them. 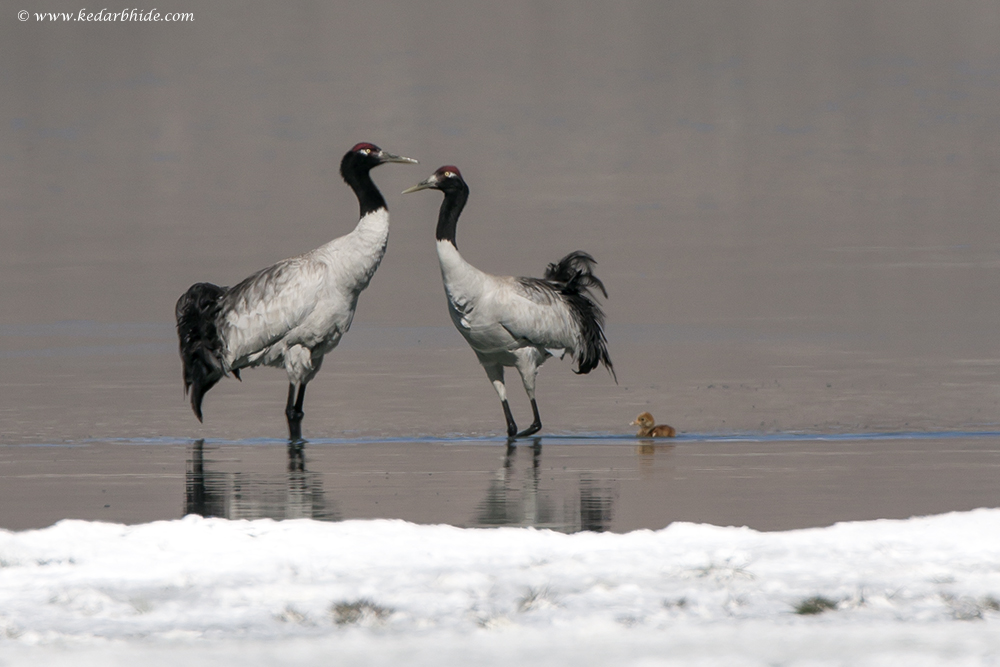 Black necked cranes during breeding season use high altitude wetlands and for wintering uses agriculture valleys at lower elevations. They are threatened with habitat degradation & loss in their wintering grounds. Though a small population is found in Ladakh, they are mainly found in Tibet, south china and Bhutan. 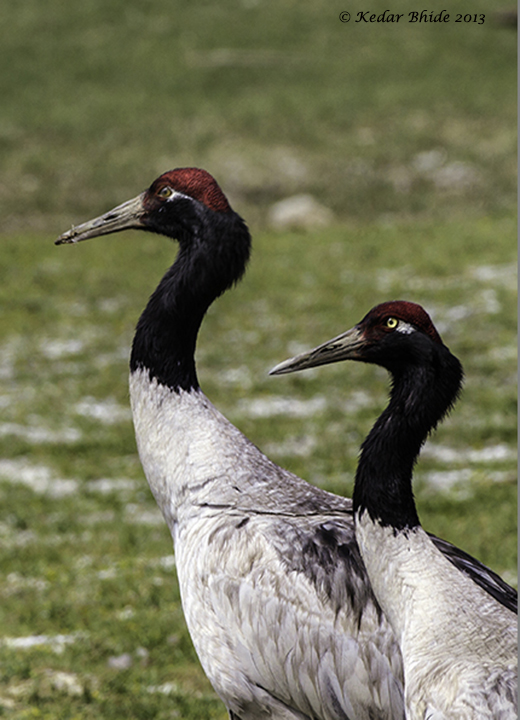 That brings me to photographing other 2 species of cranes which fly from Europe and Russia to reach their wintering grounds in India. Those are Common Cranes and Demoiselle cranes. 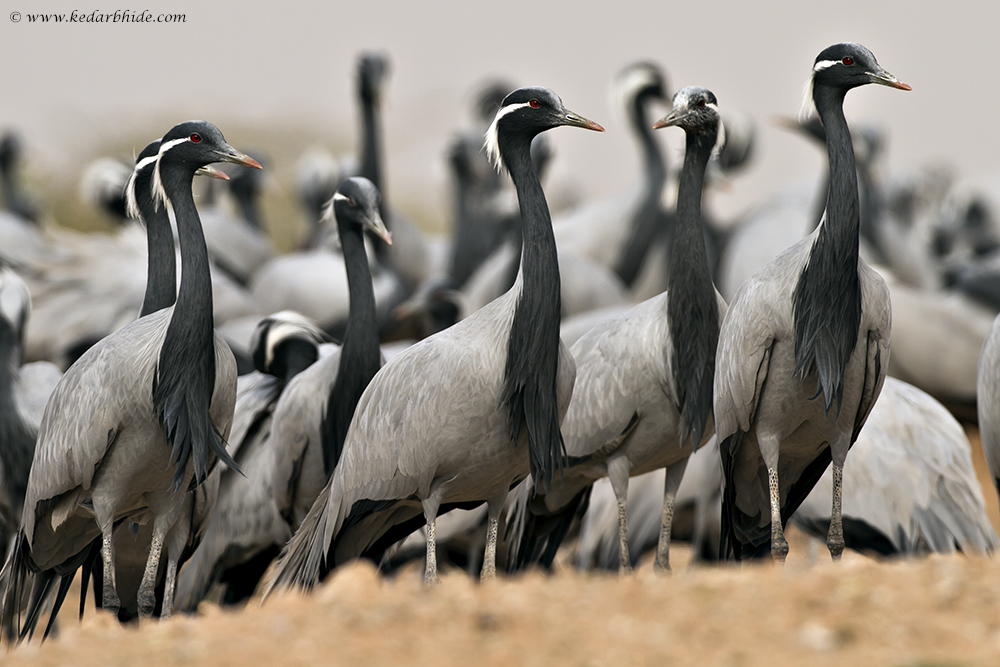 If you have to photograph Demoiselle Cranes, then the best place is a small village called Khichen in Rajasthan near Jodhpur. These are the smallest of the cranes and they winter in north, northwest and western India in thousands. I visited Khichen in one winter for half day to photograph these birds. The main challenge was to find composition. They are in such a large number that isolating them in a frame is quiet a challenge. 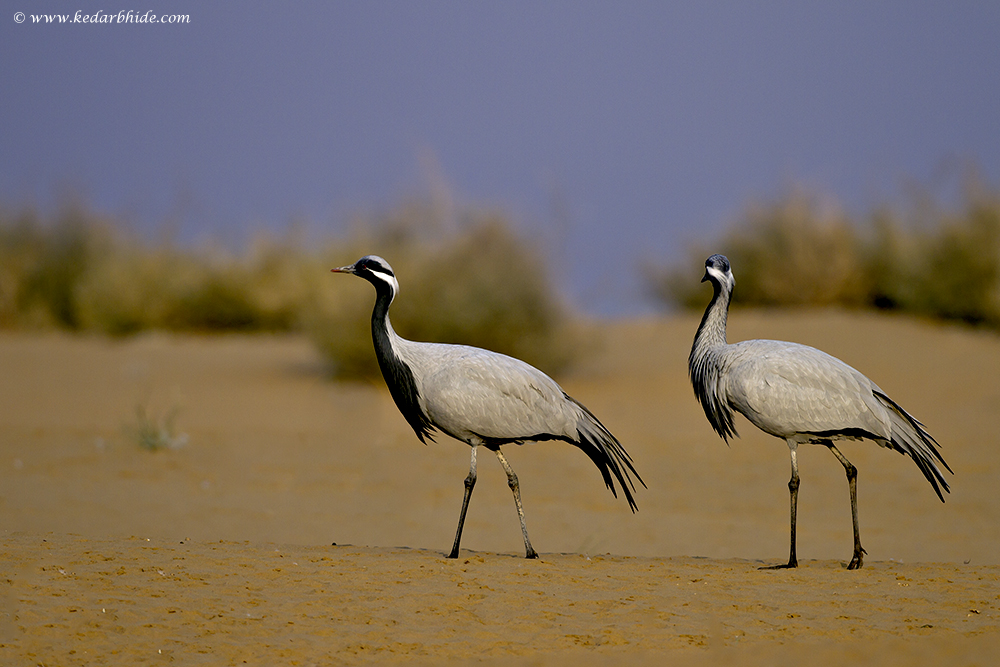 So that left me with only one crane to photograph, and that is common crane, though I have photographed them in my earlier visits to Ran of Kutch, those were some flying shots and wasn’t happy with them. So last week’s visit to Little ran of Kutch was with this major objective of photographing them. And I enjoyed doing that this time, spent a lot of time with them in morning light and now I can say, “I have been craned” !!! Hooded cranes records in India are doubtful so haven’t added them to my wishlist yet . 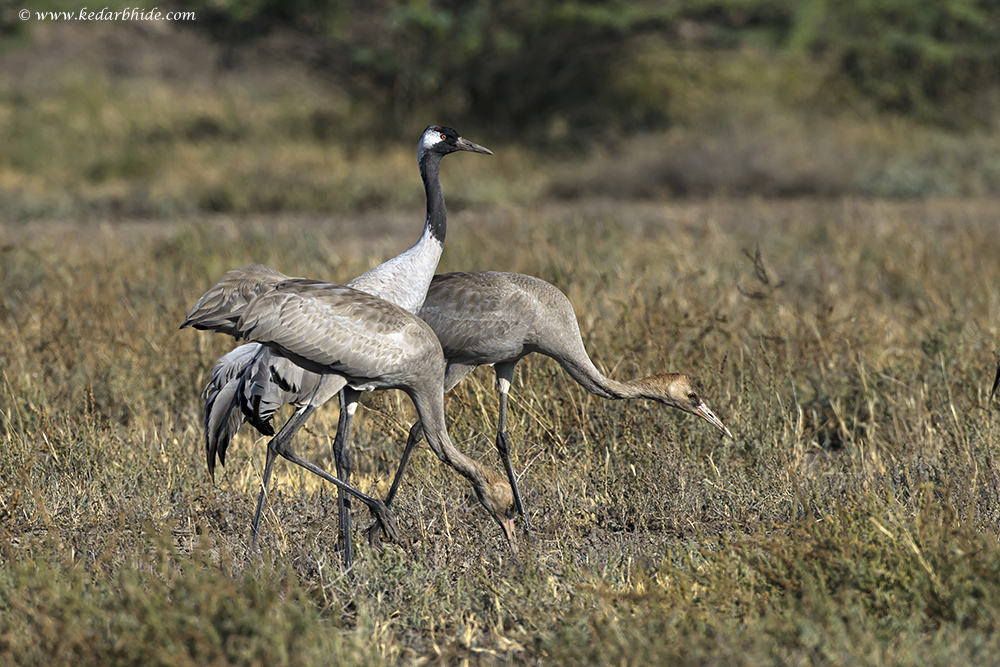 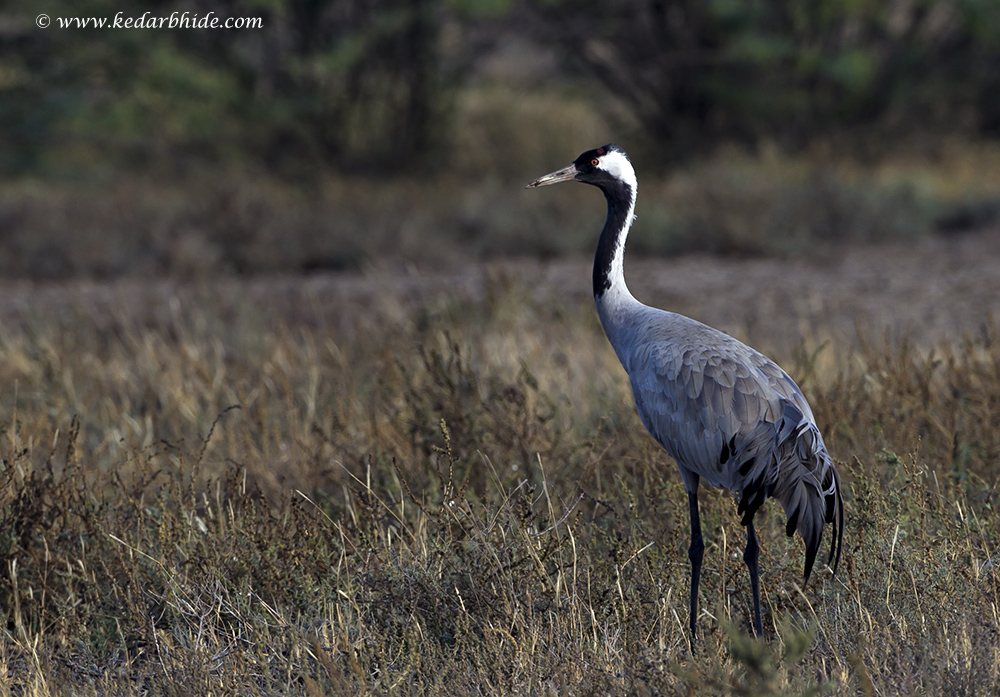