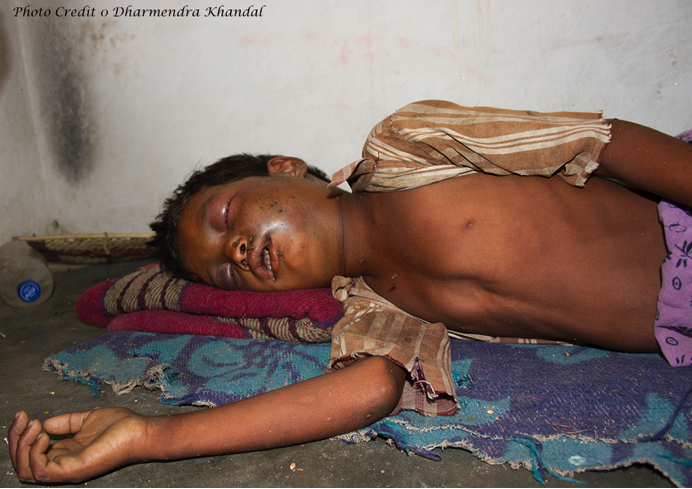 Near Ranthambore, one of the famous national parks of India, on 6th June 2014, 7-year old son of Radheshyam, a Mogiya of Andoli Village in Chouth ka Barwara, got bitten by a snake on his face. Typical of Indian rural scenario, he was taken to the local temple and kept there. Fortunately the venom injected was less and the boy, who was temporarily blinded and had a swollen face, survived after staying in the temple for 48 hours. We cannot give the exact reasons for his survival since research on venom and its effect on human body are not much studied in India.

Radheshyam was fortunate for not loosing his son, but there are thousands of unfortunate families who have lost their son, daughter, father or mother to snakebites in the rural areas of our country. Snakebite is one of the most underestimated causes of accidental deaths in modern India. It is a long neglected health issue across the country; World Health Organization (WHO) in 2009 added snakebite to the list of ‘Neglected Tropical Diseases’ (NTDs). Deaths and injuries due to snakebites are more than all the encounters and attacks from vertebrate animals in India put together.

Recent “Million Death Study“, an initiative of the Registrar General of India (RGI) and the Center for Global Health Research (CGHR) at St. Michael’s Hospital and University of Toronto, Canada, estimated that the upper limit for snake bite deaths in India is 45,900 per annum (@ 99% CI 40,900 to 50,900). Loss of limb and other serious disabilities could affect another 200,000 to 250,000 victims of venomous snakebites. At the same time, the irony is that 2008 National Health Profile report from Government of India mentions a total of 1331 snakebite deaths in 2007 for all of India. No clear data is available due to poor reporting system and poor maintenance of hospital records. If we take these estimates of the Million Death Study, then there is one snakebite death to 2 Malaria/AIDs death in our country.

But if you consider the funding, research and other measures that goes into reducing/preventing the deaths due to malaria & AIDS as compared to that of snakebite deaths, you will get a big ‘zero’. There is not a single research institute, which is dedicated to the field of snakebites; there is not a single authority that monitors the situation, to the extent that this topic is not even included in the undergraduate medical studies. If this is the situation in the health field you cant even imagine the lack of attention given to this human-animal conflict in the field of environment & conservation. This situation is a lost cause to all and mostly neglected at all levels.

The reasons for such high number of accidental deaths due to snakebite in India includes:

And our own superstitions and mythological stories on snakes makes matter worst. Snakes are probably the most misunderstood and feared group of animals in the animal kingdom with whom we share our planet.

What we need are trained medical personnel on snakebite management at Health Centers, availability of right quality and quantity of anti venom and an informed community for faster transportation of victim to Health Centers.

Though this looks pretty straightforward, it has many complex issues, which need to be addressed at an institutional and community level. Let me try to discuss each of these issues separately.

Today we have scarcity of good quality ASVS in our country. Whatever is available is made from venom acquired from snakes from Southern India. Now why do we worry about the source of venom? It’s because, the same species of snake shows wide variation in venom constituents in different geographies. Venom is complex mixture of proteins and enzymes, and these contents may depend on the prey base and temperature in that area.

Injecting horses/mules with gradually increasing dosages of snake venom produces ASVS. This process is called hyper immunization. Horse/mule is capable of producing antibodies against these venom proteins, and thus we get the antibodies to use as ASVS. Therefore, in a layman’s language, if the base venom constituents change, then ASVS constituents will also change. Hence, the ASVS produced from South Indian snakes’ venom may show less specificity to venom of the same species from Central India or any other geography.

These are assumptions based on very few studies done in India; we really need to increase our research in venoms and anti venoms for the larger public health interest.

As I have mentioned earlier, these life saving serums are produced by using animals in the process. Snakes provide the venom and horses provide the antibodies. Hence, both the Wildlife Protection Act and the Animal Welfare Act come into play in the process. Both these acts are needed for the well being of these animals, but in process it also becomes a deterrent for producing these drugs in higher quantities. We need to change our attitude from ‘stop these’ to ‘regulate these’. There is no doubt that snakes will be stressed during venom extraction and horses will be troubled during the process of creating ASVS, but we cant completely avoid these for want of a life saving resource. Science has gone much ahead to reduce these exploiting factors. Now-a-days there is no need to extract blood in large quantity from horses for these serums, there are machines from which the blood is processed, antibodies are separated and blood goes back into the horse’s body. Venom extraction, if handled properly, does not stress snakes. Venom is a replenishable commodity for snakes. They keep producing venoms as we keep producing saliva.

So in my opinion, we need to be positive while applying these laws in case of production of life saving drugs like ASVS and make the process of permissions much simpler and easier. In return, Government can control the prices or ask companies to subsidies the production which in end will reduce killing of snakes due to fear of death.

In a recent community based survey in West Bengal, it is reported that nearly 75% of the snakebite cases do not go to governmental medical facilities; they have strong beliefs in traditional faith healers or tantriks. Why do communities still believe in such practices? There are two reasons for this.

Though the snake is a wild animal, an incident of snakebite usually does not come under the ambit of ‘wildlife conservation’. Whenever there is any human-animal conflict, there is a 99% probability that it is the case of snake-human conflict, either snake getting killed or human succumbing to venomous snakebite. Though I have seen many efforts have been made to address other wild animals-human conflict, I haven’t seen any major efforts done by conservationist & researchers to research the problem or creating advocacy campaign or making efforts towards policy change at institutional level when it comes to snake-human conflict.

Even those involved in research, rescue and conservation of snakes don’t pay much attention to snakebite deaths in their areas. Snake conservation largely involves catching snakes in conflict situations and then dumping them into some forested areas or doing live snake shows for education purpose. Most of the time handling of snake takes priorities over its welfare. There are a few people who have understood the magnitude of the issue and are working towards snakebite mitigation in various geographies of India, but their number is very small. They will need encouragement, funding and support from all those who wish well for Indian bio-diversity.

Finally, it’s the right of human beings as well as snakes to coexist, which has been skewed at this moment due to the large number of avoidable deaths occurred.

Should we just accept this scenario as a non-solvable problem or live in denial that there is no problem to solve? If we stay with those beliefs, some more families will be facing a loss of their loved ones to snakebites.

Sadly at this moment I have come to the conclusion that this is a ‘Lost Frontier of human-animal conflict‘. But as an optimist I am sure that this lost cause can be found again with the combined efforts of health activists and conservationists working together for the betterment of people and conservation of snakes.

9 thoughts on “The Lost Frontier”