Panna, in the central highlands of India is a pristine forest characterized by deep, rocky valleys and plateaus specked with Kardhai, Mahua and Tendu trees, through which the Ken River flows. Its beauty notwithstanding, it is ecologically important as it forms an important link between the populations of animals on the both sides of the central Indian plains. In recent years however, PTR has stood out for other reasons. Lack of protective measures as well as rampant poaching led to the local extinction of tigers from PTR, which was confirmed in 2009, but due to an excellent and effective management system and dedicated staff, PTR now boasts of a population of 16 tigers. 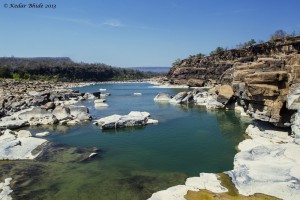 “Bagh ka sanrakshan, khud ki suraksha, choron ki pitai ”   was the slogan spoken and practiced by the frontline field staff who attended this workshop. We interacted for a whole day on  snakes, myths, snake bites and snake rescue techniques.

With the Last Wilderness foundation team, I also visited the Hostel for Bahaliya/Paradhi community girls, interacted with them , gave small presentation on common snakes and  myths.

The efforts by FD of Panna Tiger Reserves are commendable and experienced some of the people initiatives run by them which generally you see only in corporate,  I am sure it will lead to more success for the conservation efforts.

The dedicated team from Last Wilderness Foundation made a lot of difference in supporting such efforts. Their report can be read at below link